Just a day prior to the beginning of Charleston Harbor Deepening Project construction, the South Carolina Ports Authority welcomed two new ship-to-shore cranes at the Wando Welch Terminal to further enhance the handling of neo-Panamax vessels. 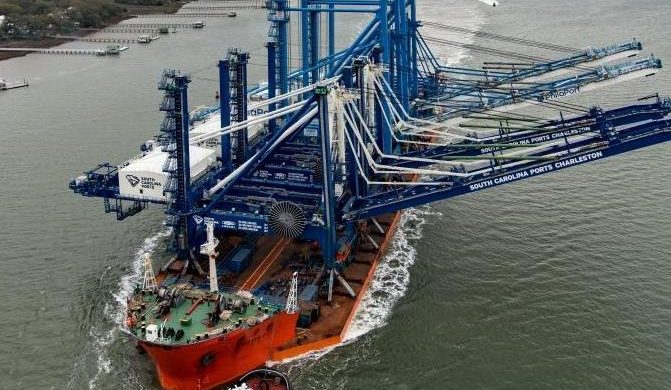 “THE CRANES ARE AN INTEGRAL PART OF THE PORT’S PLANS TO MODERNIZE EXISTING TERMINALS IN ORDER TO MORE EFFICIENTLY HANDLE BIG SHIPS. ALONG WITH THE WANDO TERMINAL WHARF STRENGTHENING PROJECT, BIGGER CRANES ENABLE THE PORT TO CONTINUE TO MEET THE NEEDS OF OUR CUSTOMERS AND DELIVER THE OPERATIONAL RELIABILITY AND PRODUCTIVITY WE ARE KNOWN FOR IN THE U.S. PORT INDUSTRY.”

The Wando Welch Terminal received its first two neo-Panamax cranes in August 2016, and an additional crane is on order for delivery in August 2019. The arrival of the cranes marks the final stage of a USD 48.4 million project to strengthen and upgrade the Wando Terminal wharf and infrastructure required for handling larger vessels. Upon commissioning of the new cranes in June, the Wando will return to a three-berth facility, the port said.

In addition to the new cranes, SCPA is raising four existing cranes from 115 feet lift height to 155 feet. By the fall of 2019, the Wando Terminal’s fleet of 13 cranes will include 9 that are neo-Panamax in size.

SCPA currently handles 20 of 27 weekly calls of vessels too large to transit the Panama Canal prior to its expansion. Beginning in April, at least two weekly services will consist of 13,000 TEU vessels, the port added.

Upon completion of harbor deepening project in 2020, Charleston will offer channels with a depth of 52 feet in the Inner Harbor and 54 feet in the Entrance Channel.