VISIT MAYOR OF ROTTERDAM TO ZPMC

On September 8, mayor of Rotterdam and his partner visited ZPMC. President of ZPMC, deputy secretary of Party committee Lu Jianzhong showed warm welcome to the guests in ZPMC Changxing Branch. Both of them exchanged opinion for the development and cooperation of ZPMC in the market of Rotterdam. 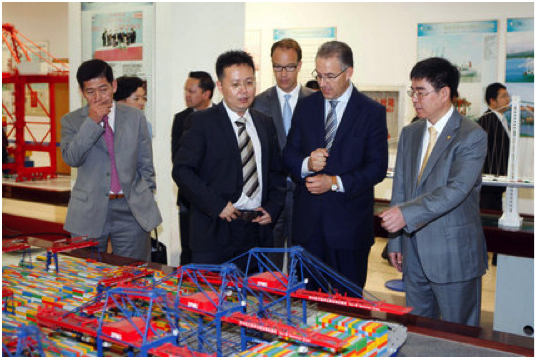 Lu JianZhong introduced the production and management and development strategy of ZPMC to the visiting mission, and introduced the traditional advantage in port machinery area and the outstanding achievement and transport strength in new area about offshore products, large steel structure etc.. Lu JianZhong thought that Rotterdam was the biggest harbor in Europe and one of the most important customers of ZPMC as well. ZPMC had paid high attention to Rotterdam Holland and the whole European market so that ZPMC founded after service centre in Europe specially and had used how to enhanced the quality of after service; how to proceed technological innovation; how to improve the quality of product as investigative lessons. He indicated that ZPMC was willing to make positive contribution to promoting the development of economy of Holland and even the entire Europe while ZPMC would be participating in the facility construction of Rotterdam.

The Mayor admired for the achievement of ZPMC in the area of port machinery manufacturing, offshore products and large steel structure. He also gave a high appraisal that the port machinery product, provided by ZPMC, had played an important role in promoting the development of economy of Rotterdam. He admitted that Rotterdam and Shanghai are sister cities. Two cities have a far-reaching and close cooperation in economy, trade etc.. It was a good choice that ZPMC set a branch in Rotterdam. The government, port office and other relevant department of Rotterdam would give adequate support. He hoped that ZPMC could continue to participate in the construction of the new port of Rotterdam, and could cooperate more in the wharf invested by Rotterdam in the future. After the meeting, the visiting mission watched the product model of ZPMC and visited Changxing Branch.

As early as in 2000, ZPMC has established a friendship with Rotterdam. ZPMC won the bidding of three bridge cranes of ETC through advanced technology and powerful manufacturing capacity. In 2005, ZPMC supplied total equipment to Euromax which is one of the most advanced automated terminal in the world, so that the brand of ZPMC was known in the Holland and even the whole European market.