The world’s largest crane manufacturer is leveraging its resources to help the industry meet the increasing need to raise STS cranes to accommodate vessels with higher deck stows.

At a 2013 ZPMC seminar on crane design engineers from some of the leading global terminal operators discussed what was becoming a pressing problem in the industry – the height of the STS crane fleet. Taking the lead from APM Terminals, which was presumed to have the inside word from Maersk Line, terminals had invested in STS cranes with lift heights of 40-42m. Maersk then surprised everyone, APM Terminals included, with plans to stack containers 10 and even 11 high on deck on its new vessels, which would require a crane lift height above the rail in excess of 50m in places.

Cranes can be raised, but the work is disruptive and costly, and ZPMC was challenged to find ways of bringing scale to the whole process. It has responded with several initiatives, including investing in its regional subsidiaries to boost their capability to complete more crane raises in shorter time periods.

This week the Rotterdam based ZPMC Crane Upgrades team announced two major STS crane heightening projects for its client Hutchison Ports. At the Port of Felixstowe five 5 STS cranes are being heightened by 9.25m and a further five will be raised by 5.25m later this year. ?The project, which commenced in July 2017, includes the relocation of the cranes to a temporary construction site, the electrical upgrade and installation of a new spreader cable reel system and various automation and mechanical improvements, ZPMC Europe said.

The second project is at HPH’s BEST terminal in Barcelona, and will see three STS cranes raised by 5m. The crane raising procedure has been designed to speed up turnaround, ensuring that operational downtime is kept to a minimum.

Speaking with WorldCargo News Eelco de Lange from ZPMC’s European senior management team said ZPMC now has five jacking frames of its own and can call in more from heavy lifting companies as required. ZPMC has formed a special engineering department in Shanghai for crane services, and is able to complete the design work more efficiently.

NEWS May 25th, 2018 Globally ZPMC has the capacity to handle 3-4 crane raising projects in Europe, 3-4 in the Americas and at least 4 projects in Asia simultaneously. The average project time per crane is 10 weeks, enabling ZPMC to raise around 60 cranes a year with its own equipment. However, that number could be as high as 100, as the project time depends on how many cranes the terminal operator can allow to be out of service at once. While raising a single crane in isolation can be completed in 10 weeks, two cranes completed together can be done in 12 weeks, and three in 14 weeks, though most terminal operators would have difficulty taking three cranes out of service for this period.

ZPMC has certainly put more resources into supporting crane raises and got more efficient at the process itself, but Eelco de Lange cautions that the work is getting more complicated. Initially terminal operators were raising cranes 4-6m, but requests for over 8m, and even 12m are now the new normal for ZPMC, said de Lange. These can be done, but typically require more structural modifications, increasing the project time to 12 weeks. 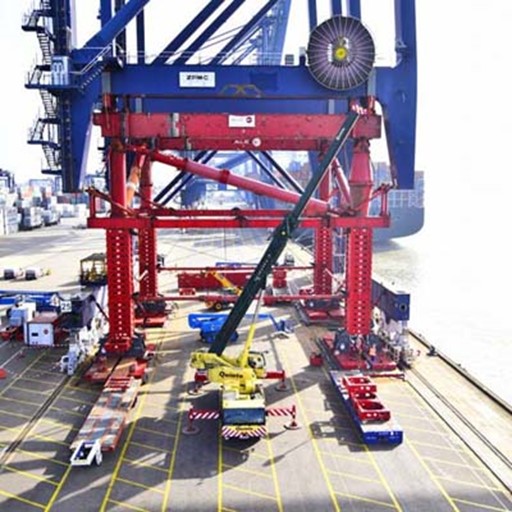