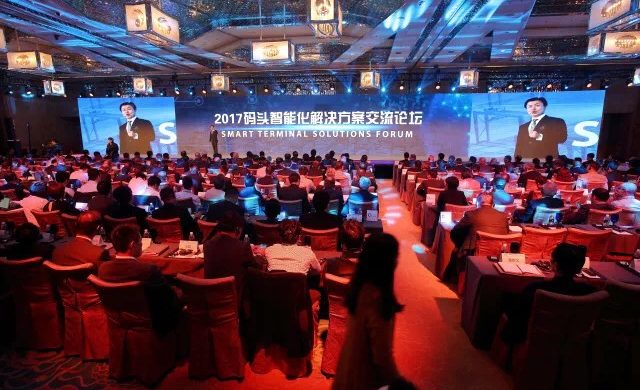 Over 400 attendees at ZPMC’s Smart Terminal Solutions Forum in Shanghai this week heard how the company plans to bring scale to port automation with a new partnership involving the four companies.

With Smart Port, ZPMC will offer the market a turn-key terminal automation package encompassing terminal design, planning and project management expertise from Moffat Nichol, software from Navis, IT services and systems from Microsoft, and its own equipment and automation systems. ZPMC will also take the role of systems integrator.

ZPMC President Huang Qingfeng told the audience the automated container terminal ?is a mainstay for ZPMC?. The company is now in the process of delivering the Yangshan Phase IV project, which will be the largest automated terminal in the world when completed, and more projects are in the pipeline, including Vado in Italy and Cosco’s terminal in Abu Dhabi. ZPMC has made considerable progress in port automation, but recognises that the market requires a more integrated approach from suppliers.

Zhang Jian, Vice President ZPMC and Chairman of the ZPMC Smart Solutions Group said the company wants to deliver a ?one stop solution? to the market, and is open to working with more partners and developing more simple interfaces to make this possible. ZPMC has been doing this already to some extent, the new QQCTN terminal in Qingdao was delivered by ZPMC using software and hardware from Navis and TMIEC, but wants to take cooperation and partnership to the next level.

Speaking for Moffat & Nichol, Vice President Ashebir Jacob said stressed that terminal automation is complex and that ?no one achieves their business case at go live?. However the one stop system solution Smart Port offers leverages proven expereince to offer terminals a ?top down, turn key? approach that can improve the way automation is delivered today.

For Navis, President Benoit De La Tour said partnering with ZPMC is a ?win-win? relationship for both companies and the wider market . He stressed that partnership is on a ?non-exclusive basis? (with Navis being a sister company to Kalmar as part of Cargotec), and that the industry needs vendors to cooperate in this manner to move automation forward.

For ZPMC, Smart Port is part of a wider 'Ecosystem' it wants to create where vendors and ports work together to move the industry forward. It also launched a new app, called Terminexus, where the market can collaborate and share information, as well as ordering and tracking spare parts from ZPMC.